Every year on our wedding anniversary my wife, Linda-Ann, and I take a week-long trip somewhere. This year we went to the Four Corners region of Arizona, New Mexico and Colorado to visit ancient Native American pueblo ruins. One place we visited was Mesa Verde in Colorado, https://www.nps.gov/meve/index.htm.

There are some amazing ruins here. You can get a ranger-guided tour through some of them ($5 per person and tickets must be purchased in-person), a self-guided walking tour to some areas and a self-guided driving tour. You want to check when these ruins will close for the season. Two ruins closed three days before we left on our trip at the end of September, and the other ruin closes from about mid-October through mid-April, due to snow.

Spruce Tree House is closed due to rock fall danger. This is usually a self-guided tour. Some stabilization needs to be done to the rock face before people will be let in again. I’m guessing that it will probably be closed for at least another year as the stabilization process hasn’t even started yet. 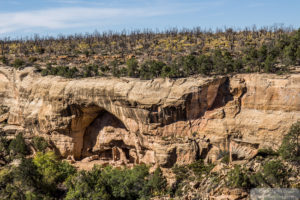 The easiest way to see as many ruins as possible is to drive along the three roads in the park and stop at the overlooks. It’s usually an easy walk from where you park to the overlooks, and you will get some great views. But you will need a long lens if you want close-up photos. We chose the Mesa Top Loop driving tour as it let us see the largest number of ruins and pit houses.

It’s amazing to me that between 600 A.D. and 1300 A.D., the Native Americans were able to build and live in these pueblos that were stuck on the side of cliffs. Carrying rocks, sometimes from miles away, and adobe to build their homes was incredible enough. But then having to climb up or down to the pueblos every day for food, water and other supplies must have kept them in amazing physical condition.

Archeologists have found about 5,000 Ancestral Puebloan sites in Mesa Verde. About 600 of these are cliff dwellings. By about 1300 A.D., almost all of the Native Americans living in the pueblos had left, for reasons unknown.

Here are some of our favorite pueblo ruins.

Pit Houses – I have seen some pit houses around Arizona, and they are pretty small. Some aren’t much more than a shallow pit that one person could lay in. But the pit houses here were huge, and intricate. They were deep, had ventilation shafts, and some pits were connected with tunnels.

Square Tower House – This is a smaller pueblo. You can easily see the four-story, 80 room, square tower in the pueblo. There is a spring below the alcove that supplied the residents with water for drinking and other uses.

Spruce Tree House – This is the third largest cliff dwelling in the park, with 120 rooms, and it’s the best preserved. Besides living quarters, there are ten rooms used to store food, including: corn, beans, squash, wild onions and pinon nuts. Stone slabs sealed the doors to these rooms to keep out rodents and rain water. 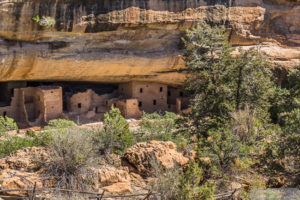 Cliff Palace – (We also went to the Cliff Palace Loop to get a closer view of these ruins.) This is the largest cliff dwelling in North America. It contains about 150 rooms, 75 open spaces and 21 kivas. An estimated 100-120 people lived here. Some of the buildings are four stories high.

By driving from overlook to overlook, we saw many of the pueblos at Mesa Verde. If the main pueblos weren’t closed, we would have gone on at least one hike into them. Some of the pueblos are an easy hike, others are more difficult. Choose the type of tour that works best for you, and enjoy the beauty and wonder of Mesa Verde National Park.

Have you been here? What would you like to tell my reader about this location?

Be notified monthly about posts added to The Creative's Corner blog. Your information will never be sold.