For years, stock photography was a large part of many professional photographer’s income. They would offer photographs to stock agencies, who would license them to clients for a specific use, and the photographer would receive 30%-50% of the licensing fee. These fees could range from hundreds to thousands of dollars.

Then along came digital photograph and microstock sites. Companies could license photographs for just a few dollars, and use them over and over again while only paying that one time. It destroyed the traditional stock photo business, and forced many photographers to delay, or come out of, retirement.

In 2009, Time magazine paid $30 for a stock photo to use on the cover of one issue. They usually pay several thousand dollars for a cover photo. Time saved a lot of money, while a photographer somewhere lost a lot of money.

But now, things have changed again. Well, at least, a little. Over the past couple of years, as cell phone cameras have improved, microstock agencies started accepting photographs taken with phones. And why shouldn’t they? In the past, most photographs were used in full-page spreads in magazines, on billboards, and in other large formats. Now, most photographs show up on computer or phone screens and are just a few inches in size.

If you take good photos, and want the chance to make a little extra money, you need to submit your photographs to the stock agencies. It’s pretty simple, since you do it through a phone app.

However, there are a few things to keep in mind:

Once you start to submit images, don’t expect the money to come rolling in. You are one of thousands of people doing the same thing. Most of the commissions you receive for a sale will be in pennies, not dollars. Making money in microstock is a long-term project. But money is money, and I’ll accept it from anywhere I can.

Below are five popular stock sites that have phone apps. There are more out there, but these are a good place to start. The information in the chart was current at time of publication.

If you find other good stock sites with apps, post it in the comments section so other people can check them out.

I would also love to know what kind of success you have by posting in the comments section. 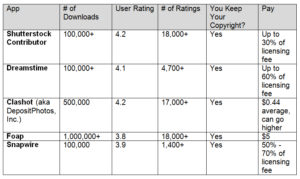 Be notified monthly about posts added to The Creative's Corner blog. Your information will never be sold.